Biologics vs. Small Molecule Drugs: Which Are Better?

The vast majority of pharmaceuticals on the market today are small molecule drugs, but in the past decade, biologics have been gaining ground at a rapid clip. Humira, a monoclonal antibody biologic from AbbVie, has been the best-selling drug in the world for a few years now, and a number of other biologics are in the top 10 list. When comparing biologics vs. small molecule drugs, there are many factors to consider, which means coming up with a clear-cut answer for which is better is complicated.

What Is a Small Molecule Drug? 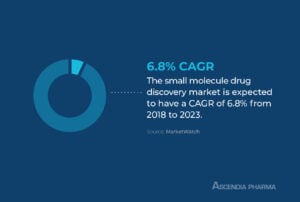 Small molecule drugs have well-defined chemical structures, as they are compounds that are manufactured through chemical synthesis. These drugs are typically either synthesized from or meant to replicate natural compounds produced by plants, fungi, and bacteria. A small molecule drug uses biochemical processes to prevent or treat disease. They are highly effective allosteric modifiers and enzyme inhibitors, and they are used to target extracellular proteins or intracellular receptors in the cytosol, nuclei, and central nervous system.

While we can expect that biologics will continue to increase their market share in the coming years, there will always be a place for small molecule drugs. One of the key advantages of small molecules is that these drugs have a low molecular weight and simple chemical structures. This lends more predictability to their pharmacokinetics (PK) and pharmacodynamics (PD), which means that dosing is simpler. 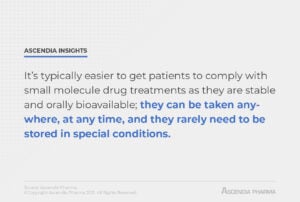 Getting patients to comply with treatment is typically easier with small molecule drugs, as they are stable and orally bioavailable; they can be taken anywhere, at any time, and they rarely need to be stored in special conditions. In comparison, biologics are heat-sensitive, polar, membrane impermeable, and some biologics are also subject to enzymatic degradation. Therapeutic proteins are not orally active, so they must be injected, which creates an obstacle for many patients.

Although biologic drugs are more targeted, they do have the potential to be immunogenic, which means the immune system identifies the drug as a foreign substance and produces antibodies against it. There’s no way to predict which patients will develop this kind of response, and the antibodies produced by the body can worsen the disease the biologic is meant to treat. In some cases, therapeutic proteins may need to be administered with immunosuppressants, which creates its own challenges.

Another point in favor of small molecule drugs is that development tends to be easier. Biologics have rigorous quality control protocols, as errors in manufacturing can introduce structural changes or variations that impact a biologic drug’s activity in the body. Because small molecule drugs are produced via chemical synthesis, there’s more predictability in the process. This does represent a disadvantage, too, since the simple production process makes small molecule drugs more easy to replicate by manufacturers of generics, both domestically and abroad.

What Is a Biologic? 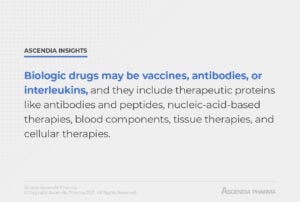 Biologic drugs are extracted from, semi-synthesized by, or manufactured in living organisms using recombinant DNA technology, as opposed to small molecule drugs, which are chemically synthesized. This makes biologics more complex. Although biologics certainly represent the future of pharmaceuticals, this doesn’t mean they’re a new technology—human growth hormone, insulin, and red-blood cell stimulating agents are all biologics.

Biologics are perhaps best known for treating certain types of cancer and autoimmune diseases, but these drugs hold promise for preventing and treating a wide range of diseases and health conditions: anemia, cystic fibrosis, diabetes, transplant rejection, growth deficiency, and hepatitis all have the potential to be treated with biologics. Biologic drugs may be vaccines, antibodies, or interleukins, and they include therapeutic proteins like antibodies and peptides, nucleic-acid-based therapies, blood components, tissue therapies, and cellular therapies.

Advantages of Biologics Over Small Molecules

Perhaps the most significant benefit of biologics is their promise in treating diseases that were once considered either untreatable or difficult to treat. Even diseases that can currently be treated may be more effectively treated with biologics; some researchers believe that both bacterial and cancer cells are developing resistance to small molecule drugs. 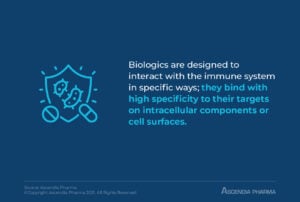 While small molecule drugs often have off-target effects, biologics offer a more targeted treatment option, as they are designed to interact with the immune system in specific ways; they bind with high specificity to their targets on intracellular components or cell surfaces. Small molecules bind with G protein-coupled receptors, ligand-gated ion channels, and receptor tyrosine kinases through the entire body, which means they can interfere with biological processes and interact with tissues, cells, and cellular components, causing side effects and adverse events.

An additional advantage of biologic drugs is that they are less likely to interact with other drugs that a patient is taking because therapeutic proteins are metabolized and eliminated the same way as endogenous molecules. Particularly in aging populations, it’s common for people to take a number of different drugs, and many medical errors are caused by drug-drug interactions. Biologics can be used with oral systemic medications with a very low risk of drug-drug interactions.

Although biologics are much more complex than their small molecule counterparts, pre-market development times for biologic drugs are typically similar, according to a recent study published in Nature Biotechnology. Because there are more challenges involved, and biologic production uses unique processes that require different equipment, machinery, and manufacturing facilities, the common assumption was that biologics require more time and money. In fact, the median total development time for the 275 new drugs approved between 2007 and 2016 was 12 years for both biologics and small molecule drugs.

In other words, there’s no need to let concerns about time or costs hold your company back when it comes to investing in biologics—with a good idea and a skilled development and manufacturing partner, you’ll get the return on investment you expect. At Ascendia, we work on the cutting edge of pharmaceuticals, including developing peptide and biological formulations. We offer a wide range of formulation vehicles, including micro emulsions, liposomes, microspheres, and nanoparticles, which allows us to protect biologic formulations against environmental conditions that would otherwise compromise their quality and efficacy.

Peptide and protein formulations are notoriously difficult, with a tendency of self-association, complex physical and chemical instability, and multiple conformers. Our scientists have overcome these problems by innovating techniques to reduce oxidation in liquid peptide formulations and slow hydrolysis through formulation lyophilization. We’ve also found a way to avoid peptide aggregation by modulating the colloidal stability through adjusting a number of different solution conditions, including buffer composition, pH, ionic strength, and the application of other excipients.

Our scientists have successfully used cyclodextrins to make peptides more stable by shielding hydrophobic amino acids and delaying the formulation of insoluble aggregation, overcoming one of the key disadvantages of biologic drugs. In developing protein formulations, Ascendia selects non-ionic surfactants and optimizes their concentrations, reducing interfacial stress and preventing the aggregation, adsorption loss, and denaturation of proteins.

The market for small molecule drugs and biologic drugs is growing due to groundbreaking new treatments and aging populations. There’s a place for both in treating disease, which means neither is better than the other. Small molecule drugs are currently more stable and easier to administer, while biologics hold more promise in tackling hard-to-treat diseases and patients.

While biologics present many challenges, particularly in their stability and complexity, these challenges are being met through innovations made by researchers and scientists, including our team at Ascendia Pharma. Although biologics aren’t new to the market, their growth and popularity is a more recent phenomenon, which means we’re still in a phase of development where significant improvements and new technologies are being discovered. We anticipate that many of the current disadvantages of biologics will be irrelevant just a few short years from now, and this will precipitate a further shift from small molecules to biologics.

Contact us today to discuss your biologics formulation and manufacturing needs.